On August 20th, YIBI held its 2016 YIBI Grand Final Conference at Sofia University. It was a huge success and thank you everyone for coming out! Here is a personal note from our President, Erika Yang, about the night.

"Hello everyone! I cannot express my happiness well enough about tonight's conference. Thank you all for your support and encouragement in giving your student's the experience of a lifetime! Congratulations to EVERY SINGLE TEAM tonight! All of you are already winners, and even the judges told me the had an extremely hard time trying to decide on which teams to pick. I hope that all the students learned something from this experience, and thank you all for your support! We couldn't have done this without you, and never forget the inner entrepreneur you all have inside and continue to work hard to achieve your dreams! ​

​YIBI Erika Yang attended the California State Science Fair 2016 for presenting a project in the category of Chemistry Senior Division on May 23-24, 2016

YIBI founder, Erika Yang, attended MIT Launch at MIT over the course of the summer of 2015. It was an amazing experience and will in the future encourage and help others with building interest in getting in and starting up companies!

On Jan 2rd, 2016, first YIBI officer meeting of the new year 2016! Thank you all for attending! Let's make this year a fantastic year!

​YIBI members learned business characteristics through the process of selling kites at San Ramon Art & Wind Festival on May 29-30, 2016. It was an extremely hot day, but YIBI members stayed at the booth for over 5 hours fundraising. We ended up fundraising over $500 and couldn't be prouder!

On January 7th, YIBI extremely pleased to announce that 5 news branches just opened in the Bay area. They are San Mateo, Palo Alto, San Jose, Sunnyvale, Cupertino. Congratulation to all these new branches, and we look forward to watching your grow and learn! Several more branches are in the process of becoming official.

On Dec 29th, YIBI held its 2016 YIBI Winter Conference at Sofia University. It was a huge success and thank you everyone for coming out! The main topic is how to improve your communication skill during a interview.

Many ​YIBI members show their support for nearby sport events such as track and field along with swimming at the Northern California Chinese Culture Athletic Federation (NCCCAF) on August 9, 2015, through helping promote the event and gain participants, while also participating themselves.

YIBI members participated in UCAHP Startup21 Contest and each brought their own projects they had been working on in the past year to compete with. These projects required students to research their own mechanics for their project to work, the financial aspects, and marketing prospects for each individual business. YIBI members, Erika Yang, Kai Lin, and Ami Feng were awarded the grand prize of $1000 Young Entrepreneur for their own business on Jan 16th, 2016

YIBI and PLAY two clubs hold WeiFan Kite Festival, teaching about the Chinese culture and the Chinese fine arts. There are more than 50 people attending this event. It was a wonderful experience and we hope to do it again soon.

YIBI's members went out into the community and performed tasks that greatly benefited the community. They were not only invited to help out with the Steve Glazer campaigning, but also to pass out flyers about the campaign and travel door to door in different neighborhoods, asking and creating awareness about the upcoming campaigns.

YIBI members received recognition for volunteering their hours to the community and were proud and honored to receive these awards from Catharine Baker, California Statewoman, herself.

YIBI's sent out a team (Erika Yang, Nancy Tong, Edwin Mui, and Steven Yuan) to attend the 2015 Sino-American Business Challenge Competition, held in San Francisco. There were about 100 high school students from China and US who attended this competition. During the competition, YIBI learned about real-life business, and how to make deals and how to make the best out of a situation. Throughout the process, they benefited greatly from the experience, and learned about how to manage in the business world, and how to become a team together.

YIBI's members have recently visited Stanford University in order to attend VLAB's Annual Young Entrepreneurs Event! The event was wonderful, with gourmet food served in the beginning and a panel discussion with the modern, young woman CEOs of companies such as TRUSTe, Entefy, Revel Systems, Enplug, and much more! These women were truly amazing; starting up their own businesses and becoming a CEO before they are even the age of 30. After going to this event, our YIBI members have said that it was truly a life-changing experience and shows us of how we should go and get what we want and do what we want to do, out in the world. Special thanks to the people who hosted the event, and Grace Tong, and hope to have more events like these in the future!

YIBI has organized a seminar for high school students and their parents, featuring speakers from different colleges, such as UC Berkeley and Columbia University! The speakers consisted of Dr. Liu, graduate from UC Berkeley, and professor from the California State University, college student Eric Wen at Columbia University, and finally, college student Steven Wang at UC Berkeley. These students and professor described their own experience of seeing students, or themselves, going through high school, and also ways they overcame their challenges and managed to pop out as an outstanding student with leadership skills! Many students and parents asked questions during the seminar, and it was a huge success! In addition, the students and parents socialized afterwards, and had a great time! A huge thanks to all the speakers who taught us so much, and thank you all for coming to this seminar! There will be more coming soon!

One of our YIBI officers, Kaitlyn Wang, had the wonderful chance to visit the infamous office of Google. She was invited into the business corporation and wrote about her insightful experience.

The first thing that struck me about the Googleplex was its size. Instead of being encased inside several large, tall buildings, the offices, which are relatively short in height, are spread across a sprawling campus. After stopping by the visitor's center and the Google Store, we were led into a conference room. We had lunch, and then were given time with a panel of female engineers. They answered many thoughtful questions, and gave their experiences on and opinions about many different topics, including gender bias, how they chose their careers, and why they wanted to work for Google. We were also informed of scholarships and internship opportunities that Google offered. Overall, the trip was delightful and engaging. The food was delicious, the art installations were stunning, and it was very interesting to learn about Google’s unique work environment. 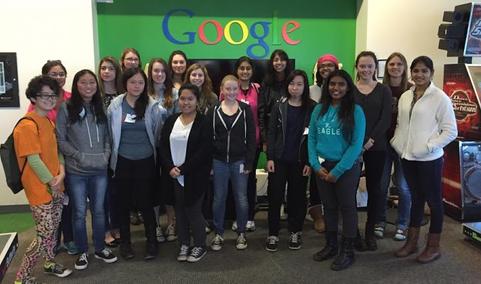 YIBI’s first community event, teaching students the “Little Apple Dance”, was a huge success. The dance was taught by Adam Zhu, Erika Yang, and Kaitlyn Wang, with help from Georgia Higgins, Araceli Hernandez, and Kristen Wong. The students and instructors all enjoyed themselves, and the event helped promote social confidence and leadership skills. After the dance, refreshments were served, and the students were given time to mingle. Special YIBI cookies and cupcakes were made by Erika Yang, Georgia Higgins, Araceli Hernandez, and Grace Massondale. Additional snacks were also wonderfully prepared by Georgia Higgins and Adam Zhu. Special thanks to Raymat Materials Inc. for providing the location!

On December 28th, 2014, we hosted YIBI’s little apple dance event. We came to teach as their instructor for the little apple dance. When I first came, I was a little nervous as we were about to teach many children and adults alike. Most of the children were around 9-14 years old! When I arrived, I was very surprised to see many children all waiting and excited to learn how to dance. After the event started, I was much calmer as it was way easier than I thought it would be.

The Event started with the team showing what the dance looked like to everyone. After we introduced the music, I then proceeded to teach everyone how to dance, one step at a time. It was quite fun teaching and a great experience for everyone the room. We finished our day with some food and snacks. The children were all attentive and enjoying themselves while dancing. This dance was my first experience being an instructor, and it made me very happy to see the children happy as well. In the end, I wasn’t nervous anymore, I was relaxed and easy. The day was great and I had a lot of fun teaching kids how to dance and popular Chinese dance.

YIBI has just hosted their first community event by teaching students the popular, Chinese dance called the "Little Apple Dance." It was a very fun event, with the main instructors Adam Zhu and Kaitlyn Wang teaching the youth how to dance the "Little Apple Dance." Along with them, instructors Erika Yang, Georgia Higgins, Araceli Hernandez, and Kristen Wong all pitched in by helping the youth beside them. It was very successful with all who attended and learned how to dance the "Little Apple Dance" and had social time afterwards with snacks provided by Adam Zhu and Georgia Higgins, with YIBI cookies made specifically by Erika Yang, Georgia Higgins, Araceli Hernandez, and Grace Massondale. A big thanks to everyone who came and hope to see you at more events!

Some of our own loved the event so much, they wrote about their experience. 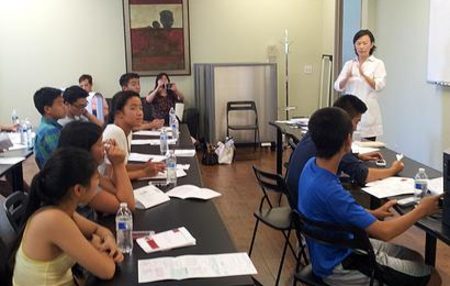 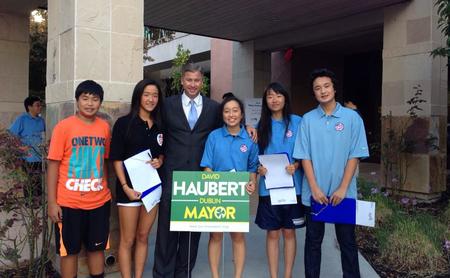 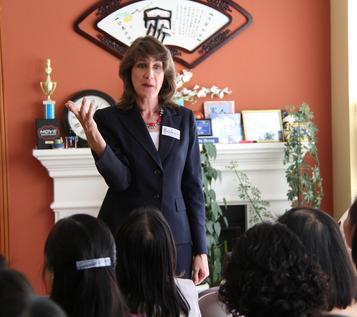 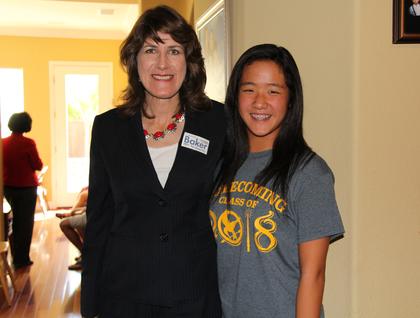 At the "Friends of Special Needs" Gala 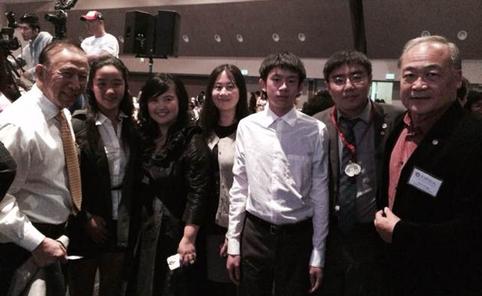 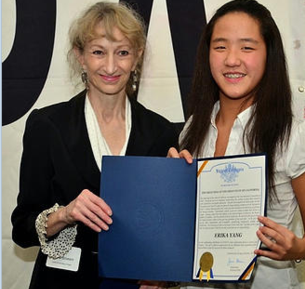 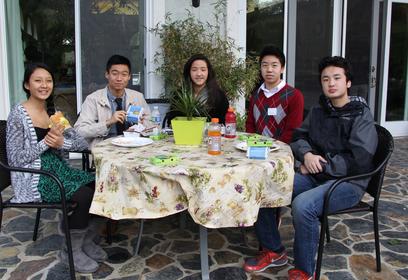 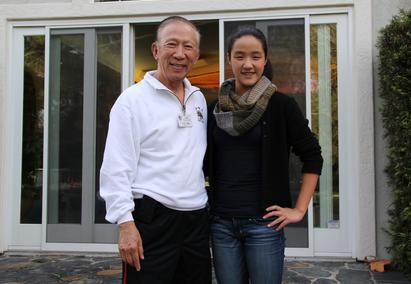 June 20th-24th 6 YIBI members have attended a future business leadership boost camp. This camp teaches students the basis of business and how to successfully become a entrepreneur and start-up a business.

Many ​YIBI members give back to the community by hosting a Little Apple Dance lessons. In addition, these dancers that YIBI taught were able to perform so well, they were nominated to also perform at the Mission City Center for Performing Arts theater in front of 300 people. Good work everyone!